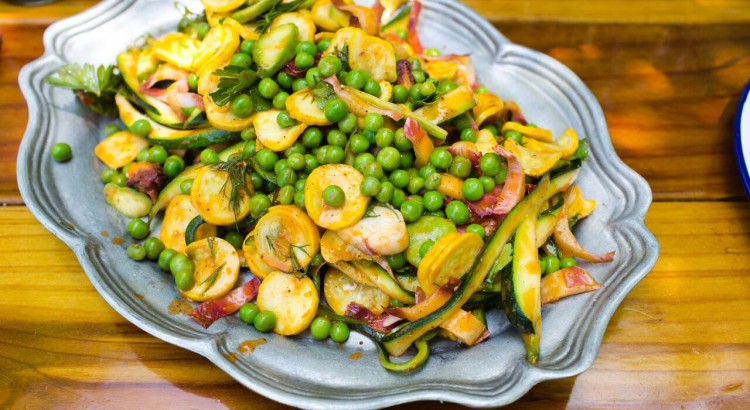 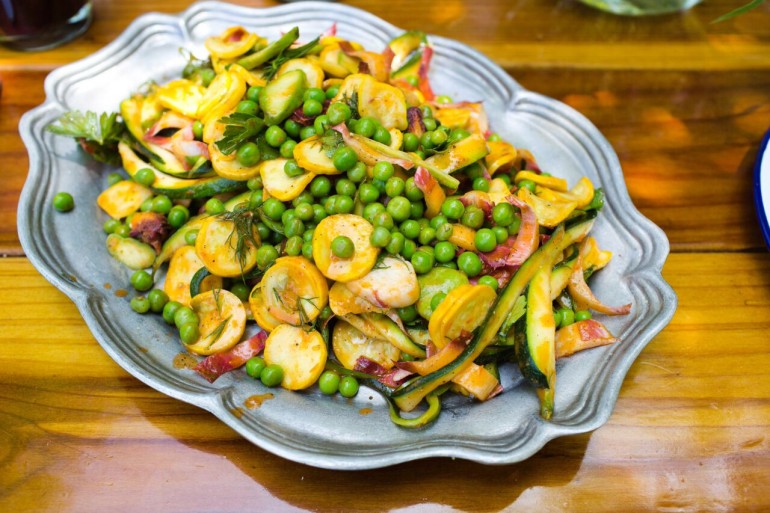 When you hear the word “raw” in front of zucchini, you may very well have a yuck response, but if you macerate it after chopping, it will become pliable and can even be subbed in for noodles! Zucchini is mostly water but the skin has potassium in it and if you can get your dog to eat it then it’s a great low calorie snack for them to nibble on.

This salad is healthy, colorful, easy and, well, delicious. We served it at this pretty fourth of July party. It’s a perfect addition to any summer bbq!

Trim the ends of the zucchini and squash, and cut lengthwise in quarters to expose the seeds. carefully remove seeds by cutting them out in a long, flat strip and discard that strip. As thinly as you can, slice the zucchini and squashes into long strips, then add to mixing bowl. For the patty pan, slice the ends and discard, then slice as thinly as possible and add to bowl. Toss with 2 oz salt (yes, it’s a lot) and allow to rest for 30 minutes while you prepare the dressing (recipe below). Water will release from these vegetables, making them pliable and tender.

In another mixing bowl combine the peas, endive, parsley, and dill.

Once the water has released from the zucchini mixture strain the liquid released and then rinse the vegetables with cold water. Shake off the cold water and combine with the pea mixture. Now add half the dressing more or less to taste and season with salt and pepper as you see fit.

1/2 cup almonds, toasted (you can keep them raw but the flavor is less complex) and chopped

salt and pepper to taste

In a saute pan, combine olive oil, garlic, peppers, and shallots, and place over high heat for 5 minutes, or until garlic just begins to brown. Removed from heat and strain the oil to set aside. Allow everything to cool and then add the pepper mixture to a blender with lemon juice. Season with salt and pepper, and blend to a coarse puree. With the blender on low, add the cooled olive oil and then the almonds.

2 thoughts on “Raw Summer Veggie Side”