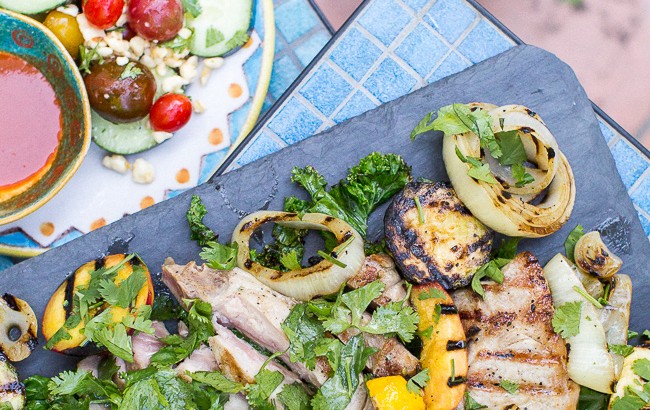 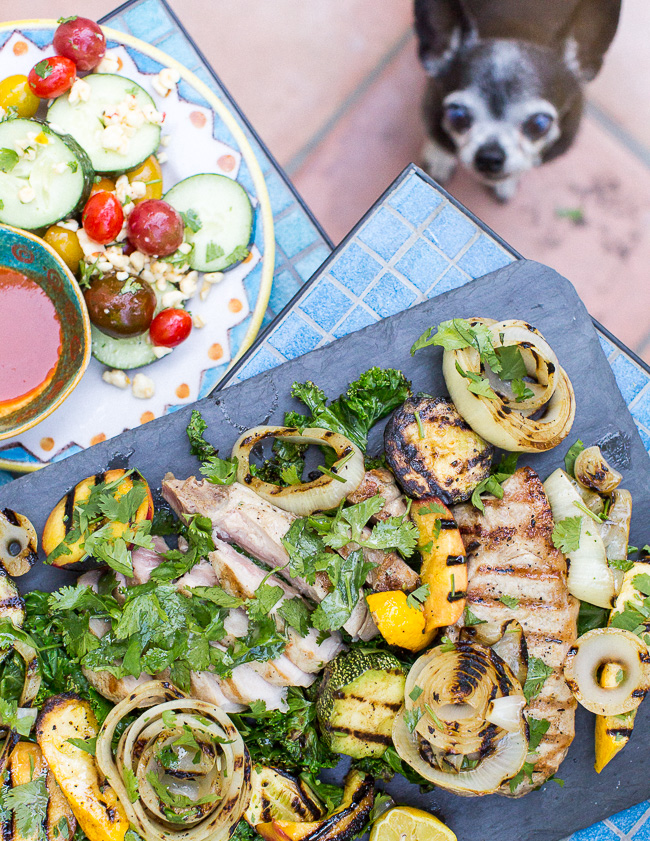 This past Sunday, Summer Solstice, was a rare day off for our chef, Matt and I. We drove straight to our favorite bakery, Proof, in Atwater Village, and then strolled through the Farmer’s Market a block away where we found a new dairy cheese purveyor (Spring Hill Cheese) that intrigued us so we purchased a lot of fatty blocks to sample. Farmers at Sunday’s Atwater Farmer’s Market who are the real deal are Kenter Farms, Fat Uncle Farms, JF Organics (they were selling pork chops!), and Jimenez Farms. Matt collected goodies from each one of them which he then whipped up in about 30 minutes into this delicious dish that made me feel so guilty for not having invited anyone over. I mean look at it!  So to feel less selfish, I’m going to share the recipe with you here..

1 white onion, peeled and sliced in 1/4″ round steaks (keep intact for easy grilling)

3 zucchini, washed and cut into long pieces or obliques

salt and pepper to taste

• preheat grill pan over high heat, turn on hood vents and open the windows. it’s going to get smokey. let pork chops come to room temperature and season with salt, pepper and olive oil on both sides. allow to sit for 5-10 minutes with seasoning to absorb the liquids of the chop. do the same for the nectarines and onions, being careful to keep the onion in whole slices as this will keep it easier to flip them as prevent burning because they will steam and remain tender as the outside gets a nice char and caramelization.

• in a mixing bowl, toss zucchini with 3-4 tablespoons of olive oil, salt and pepper. allow to rest at least 5 minutes before grilling.

• pork chops are meant to be served medium rare to medium. when cooking with the bone you may need to cook an additional 1-2 minutes on each side as it may take longer but leaving the bone in will add much more juiciness and flavor. remove from grill pan and place on a plate. immediately cover with a plate on top or with aluminum foil as this will carry over some cooking, and the steam will provide additional flavor.

• immediately place zucchini one by one into the same pan. it’s ok it they don’t all fit, just do another round. grill on all sides until nice grill marks and tenderness have been achieved. transfer to a separate plate to rest. next up onions. do the same.

•the nectarines will only take about 30-45 seconds on each side as the sugar will caramelize quickly. once a char is achieved, they will release easily from the pan. set aside.

• now turn off the heat. add the kale to the mixing pan with all the residual seasoning and juices. add it to the grill pan to steam. once it has turned dark green and is tender, transfer to your platter to build the bed for your platter

• slice chops into strips and arrange on the platter atop the kale, and top with the juices. squeeze lemon juice over the plate that the pork was holding on and then add cilantro and remaining olive oil to make a cilantro-lemon-pork-jus dressing. arrange zucchini, nectarines and onions on the platter and garnish with the cilantro and dressing.

don’t let your dog eat it.