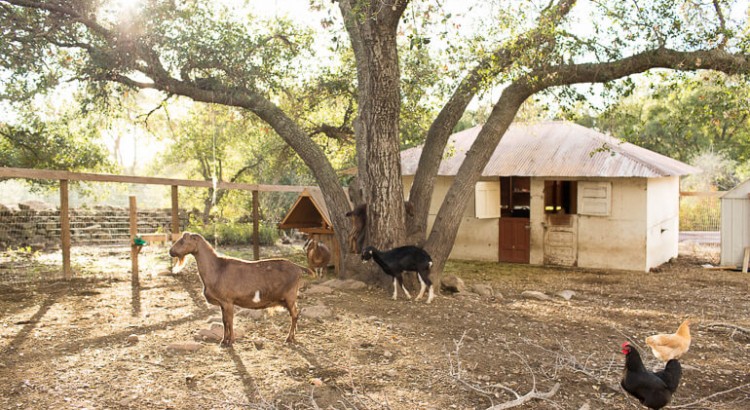 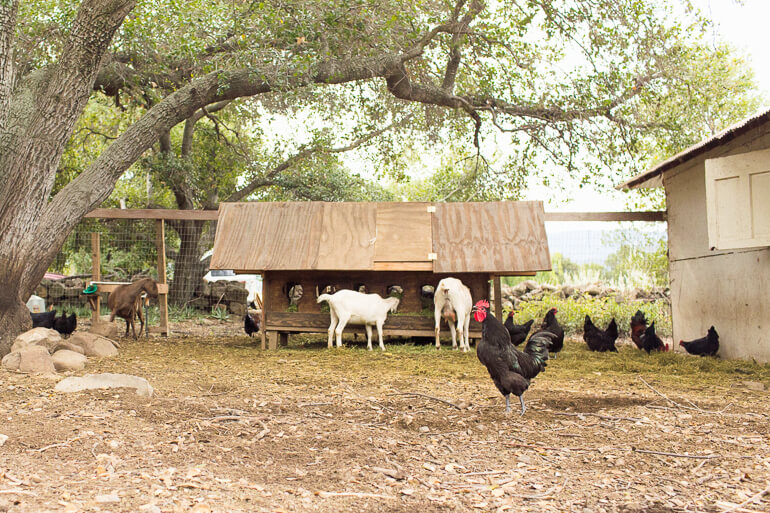 Goooooodddddddd Moooooorrrrrniiiing! We heard this announcement from one of several roosters each of the four glorious mornings we spent at The Thacher House in Ojai, just an hour and half drive out north of Los Angeles. Surrounded by the lush tranquility of citrus and pink peppercorn trees with indigenous stone structures subtly marking property lines, this little Bed and Breakfast farm felt like the perfect escape our chef Matt and I needed. 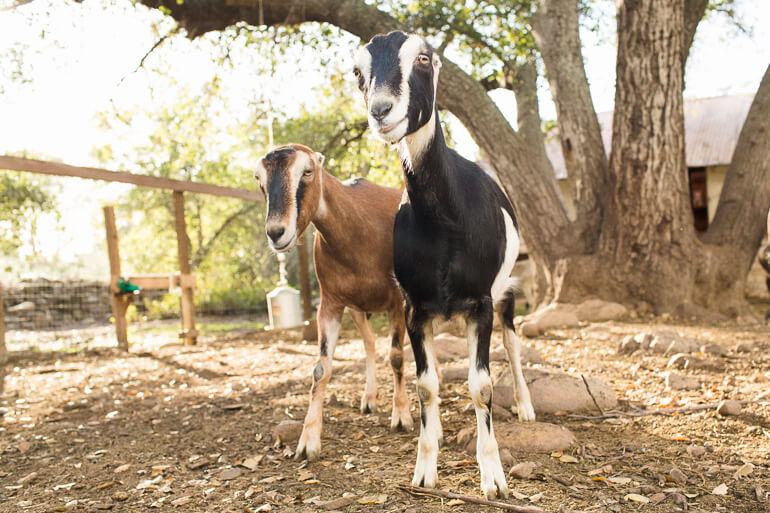 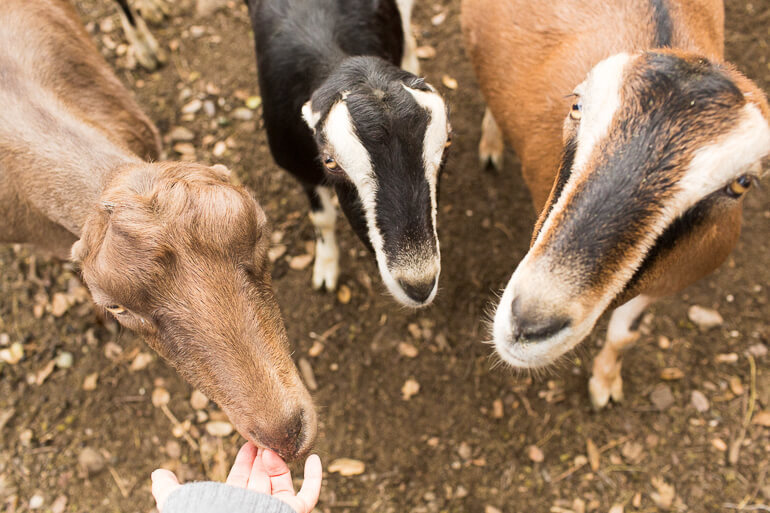 Thus far, goats are the most friendly farm animals I have encountered so I ran with glee to go meet the ones living at The Thacher House. Goats are a bit shy at first but their curiosity and love of affection get the best of them and so I’ve personally never met one I couldn’t befriend. Remember our visit to our purveyor of farmstead goat cheese, Drake Family Farm, where I spent about eight hours holding and petting them? I even got to witness the birth of one here. 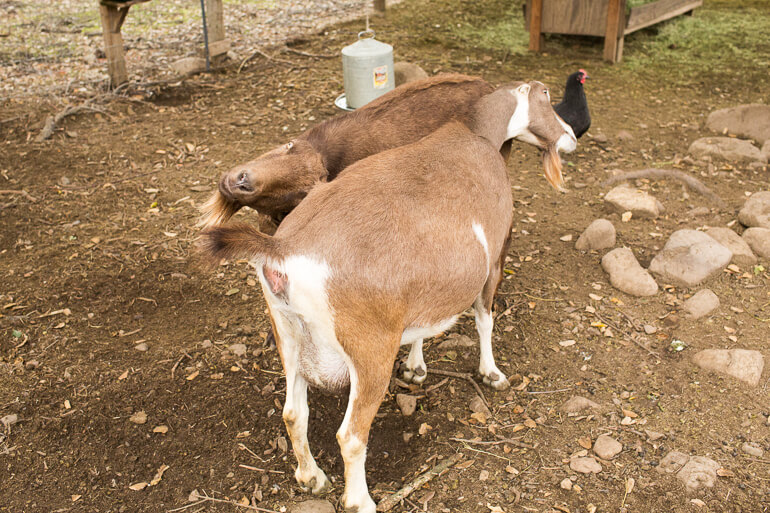 During our visit to The Thacher House, all the adult females were pregnant, and so a common (and touching) activity between them was to nuzzle one another’s bellies. 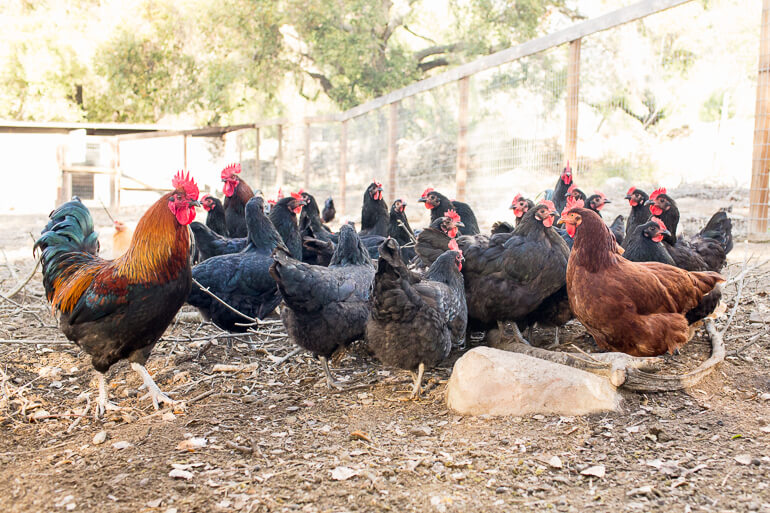 Roosters were easy to identify here with their rich coloring and “cocky” posturing. To ensure that all eggs are fertilized for the most nutritionally dense ingredient, farms need a ratio of about one rooster per ten hens, and this farm had a bit more than that so there were some baby chicks scooting around in a back pen. 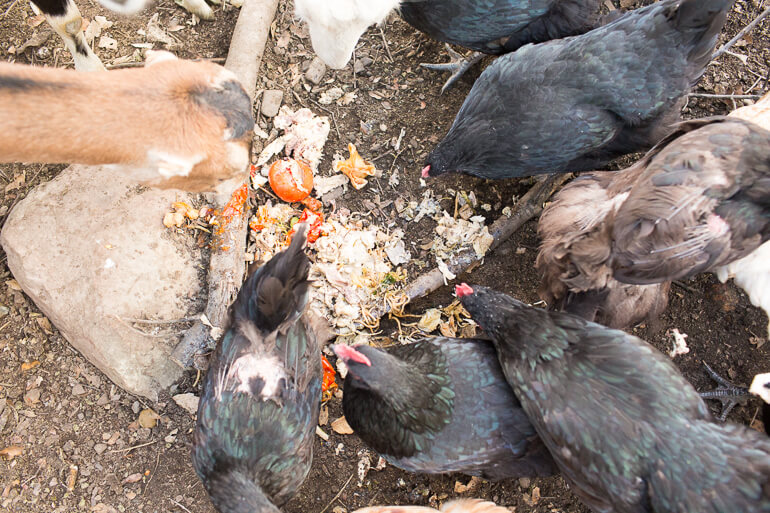 Chickens are essentially living compost bins, and because they require protein, they eat meat scraps as well as any other food scraps headed to the trash. To prevent them from garnering a taste for egg shells, the method used here is to grind the discarded shells with vegetable and/or fruit peelings. To complete the circle nature intended, their doo-doo is collected as a prized soil amendment, leaving a farm such as this one to produce very minimal waste. 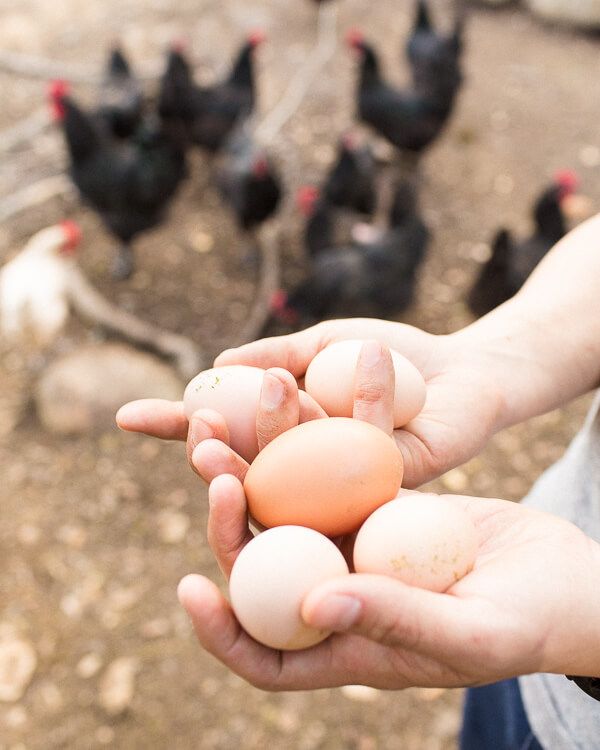 Each morning we collected eggs from wherever the hens decided to lay them. Sometimes it was in the goat feeder and oftentimes they were still warm, but always they had irregularities in shape and sizes ensuring that they actually fulfilled the commonly assumed definition of “free-range”. What a treat! 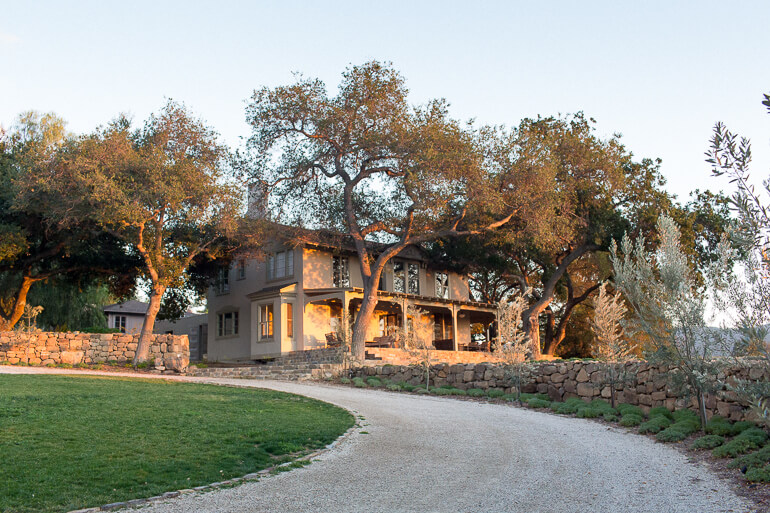 Next up was breakfast in this beautiful house originally built in 1890, and refurbished by the owner, chef, and operator of The Thacher House, Calvin Zara, who quickly became a friend of ours. He is one of those people that to-know-him-is-to-love him very aptly applies. 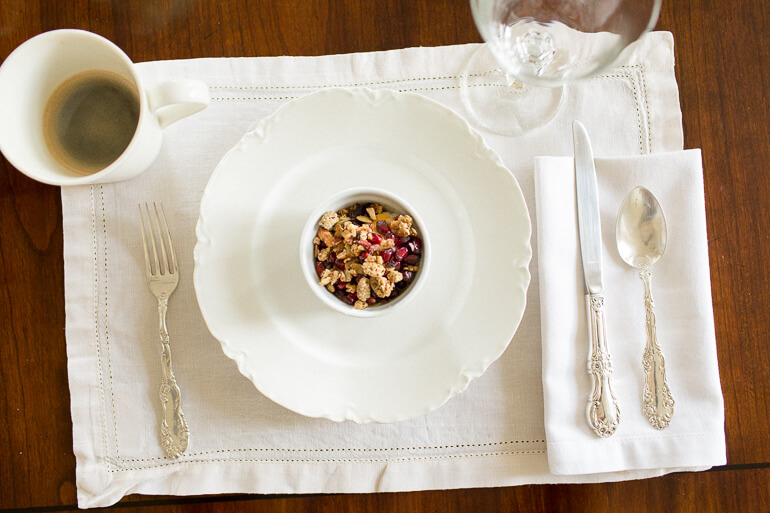 Such care was taken for each course of breakfast that Cal made. I didn’t know there was another vintage linen geek out there. In Cal I found my match, but the food he served quickly diverted my attention. Here you see a house made yogurt (not goat because his girls were all pregnant and taking a break from milking), with pomegranates picked from the property, and a house made granola heavy on nuts and light on sweetness. 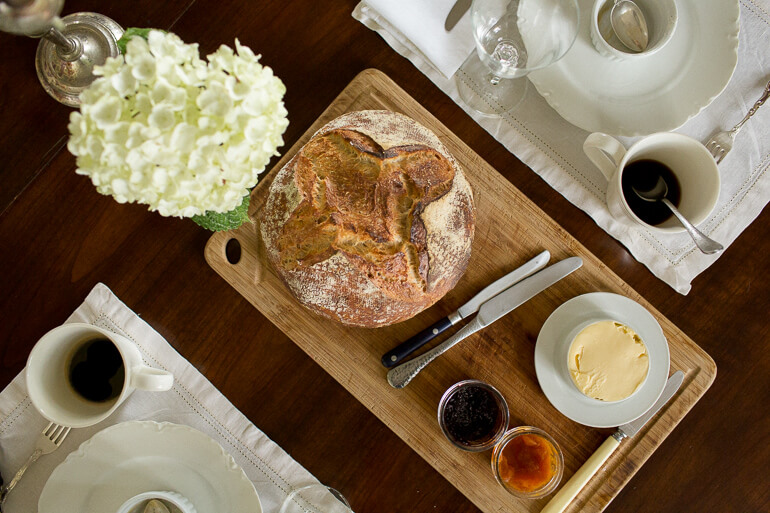 Okay. Cal makes sour dough loaves every single day. Way to my heart. As if that’s not enough he serves it with European-style butter and house made jams from fruits he barters for with other urban farmers in the area. 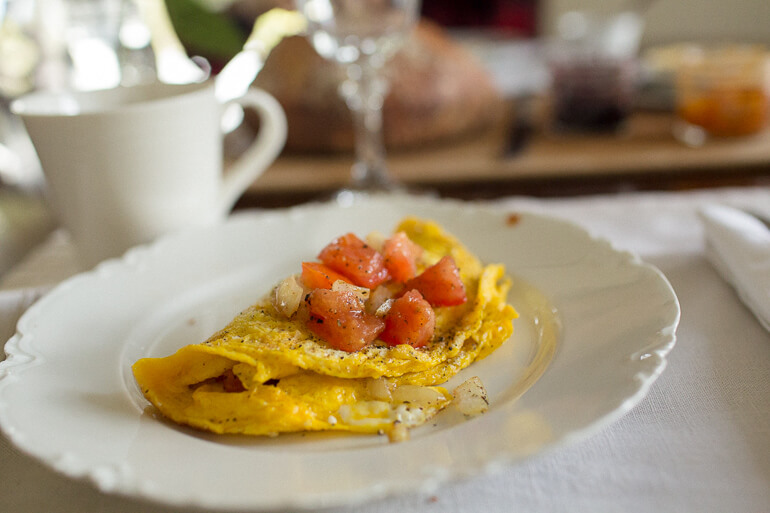 This omelette had house made feta in it which hurt my feelings it was so good. Cal’s not a chef by trade but his father was so he learned a lot by osmosis and a sincere love for all handcrafted things. 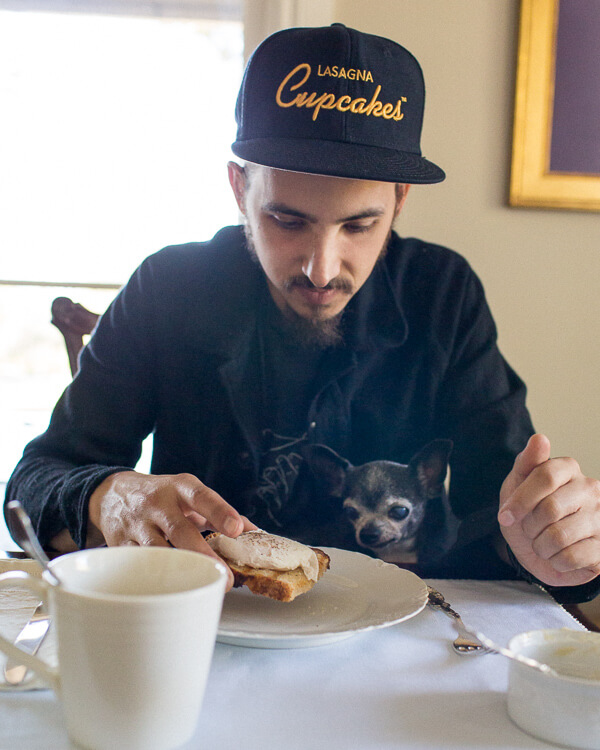 Matt got his farm eggs poached and our chihuahua, Pink, was anxious to help clean up any last bits, but there weren’t any. Sorry Pink.

Yes, this Bed and Breakfast allows dogs, just keep them away from the farm animals. 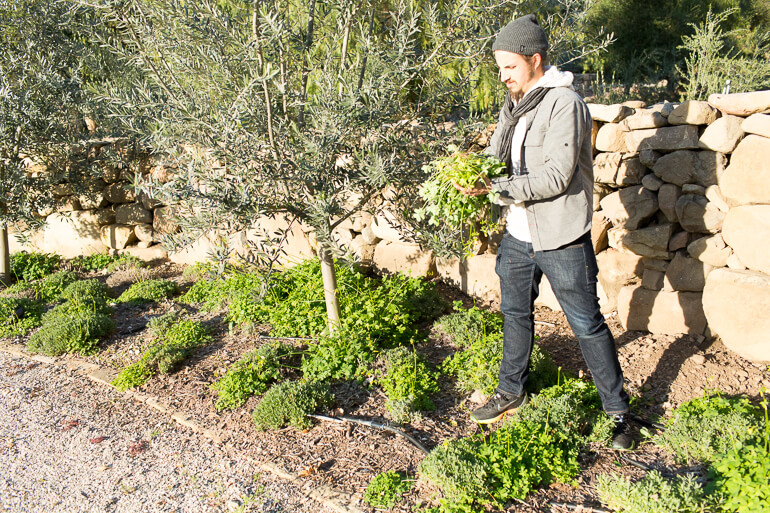 Outside Cal instructed us to pick “weeds” which are alfalfa plants that have yellow flowers blooming even in the winter. The taste is strongly sour and if left with the stem intact, there is a watery crunch to them. 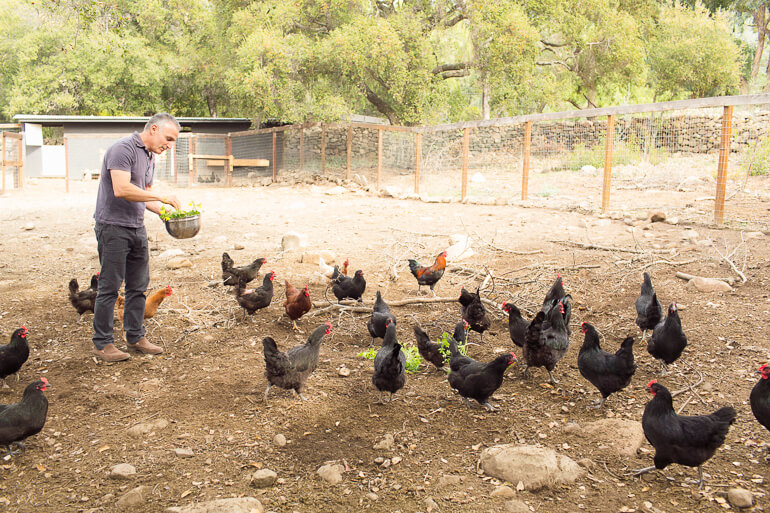 Here is Cal feeding his chickens, about 50 in total. He did not leave out the chicks you see in the back there. At two weeks old, they are separated until they can defend themselves with their elders. Cal says they are so innocent as little chicks and don’t quite get the etiquette for eating so he allows them alone time with a mother hen to keep them warm for a few weeks. 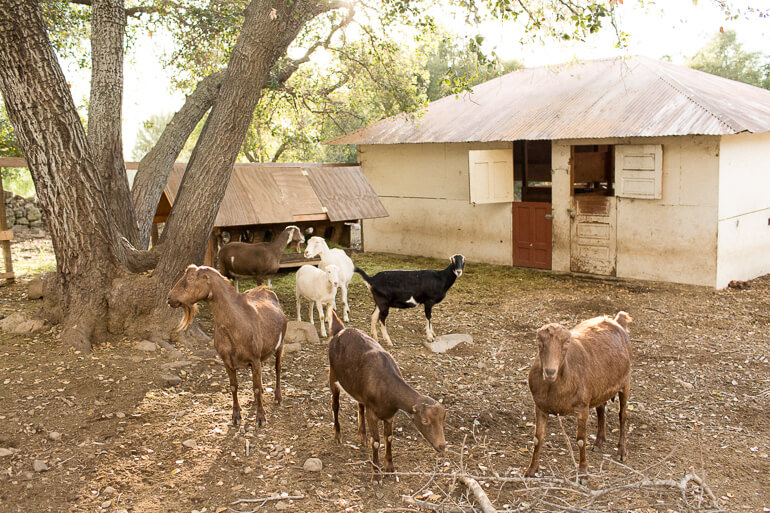 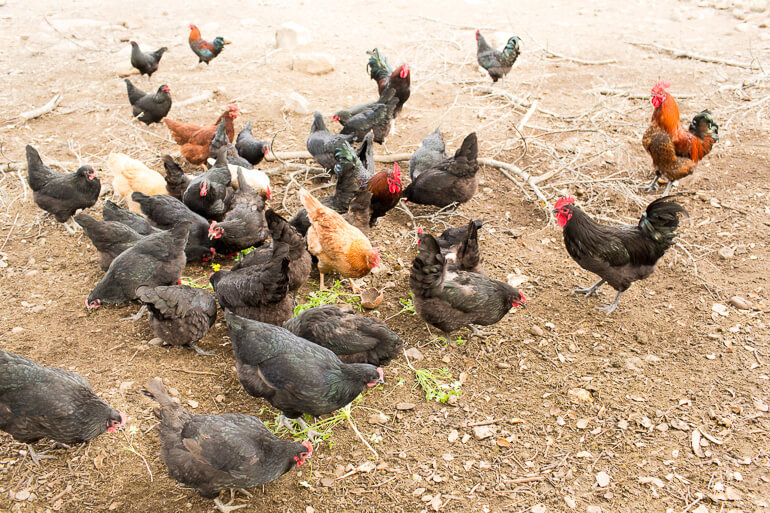 Both the goats and the chickens love this nutritious weed that also enhances the soil it grows in. I actually have taken alfalfa supplements for years for it’s blood cleansing properties. 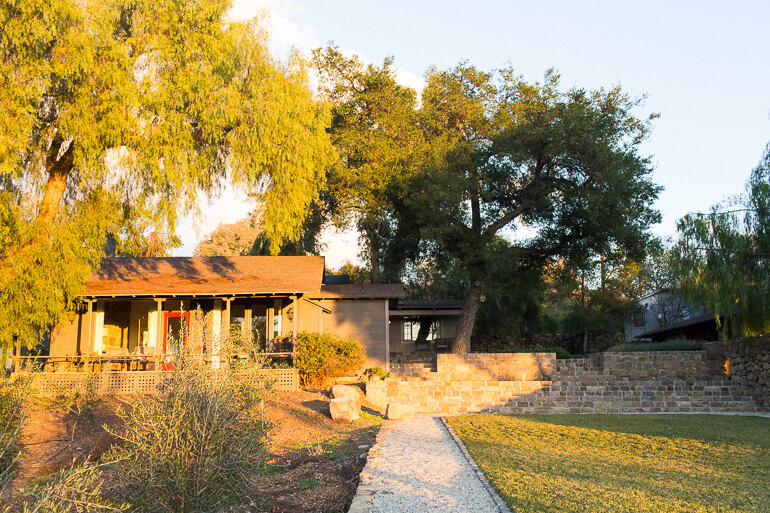 There are several enchanting cottages like this one above where property guests stay. Families rent the whole property at one time which would be so ideal. There’s even a cozy conference room for upscale business retreats. 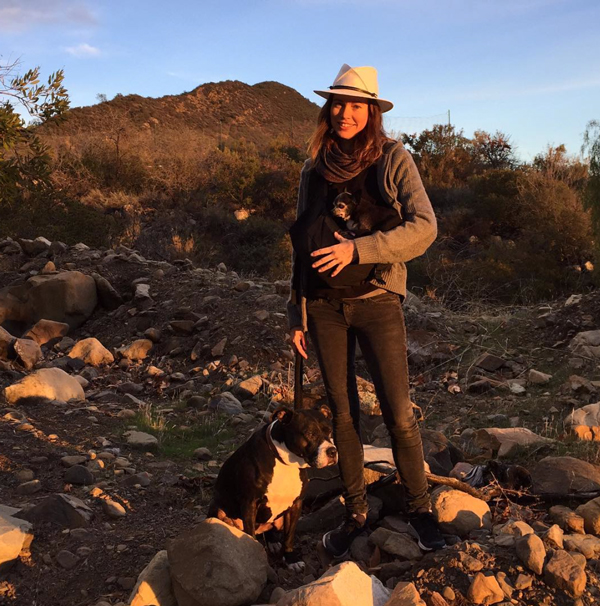 The most exquisite hikes abound in these parts, and all the neighbors wave at you as you decompress your city energy on your trek. There are brooks of running water and so many ancient looking trees to rest under. In fact, there’s not a whole lot else to do but hike, so that’s what we did to compensate for all the bread we ate. 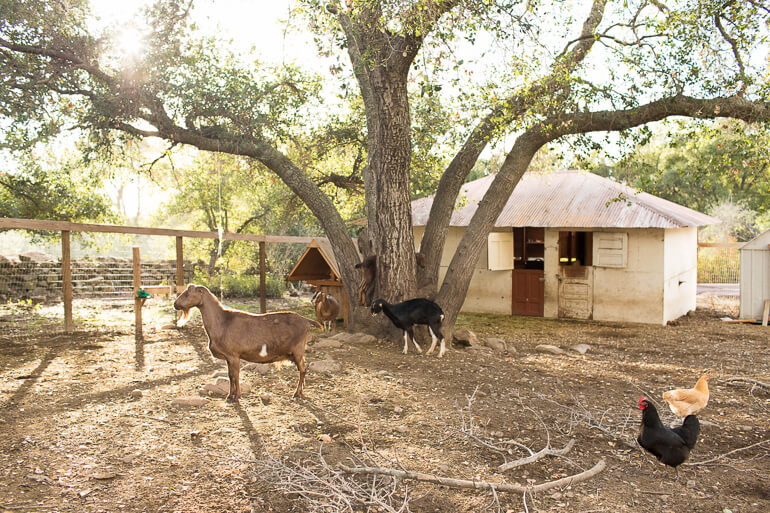 Standing regally here is Judge Judy, the dominant goat. Fat with babies nestling inside of her, she would come over and give me a swift smack on my leg with her head each time I entered her territory but then would move to take a graceful pose in front of my lens. I was thoroughly charmed by her, especially when I would witness each of her teenage daughters snuggle with her rather frequently. She is a good mama, but I think she longs to be a movie star.

We learned a lot about urban farming here, how there is no such thing as a chicken pecking order when your chickens are happy with enough variation of food and plenty of space to dig for worms. I learned that many people relish baby goat meat, but with a deep affection for these animals, I will never be one of them. The more I visit small family farms and urban farms such as this one in Ojai or even this one near us in Atwater Village, the more I realize I want to have my own. The therapeutic benefits are indisputable and the ecological ones are critical to our prevalence on this planet.

Stand by. I’m looking for land on this Sunday afternoon.