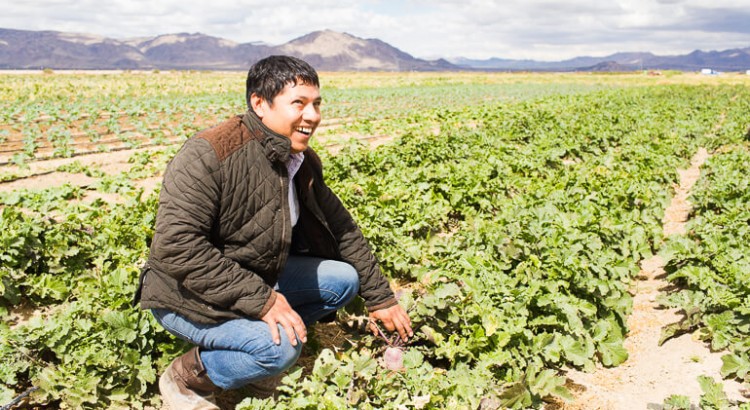 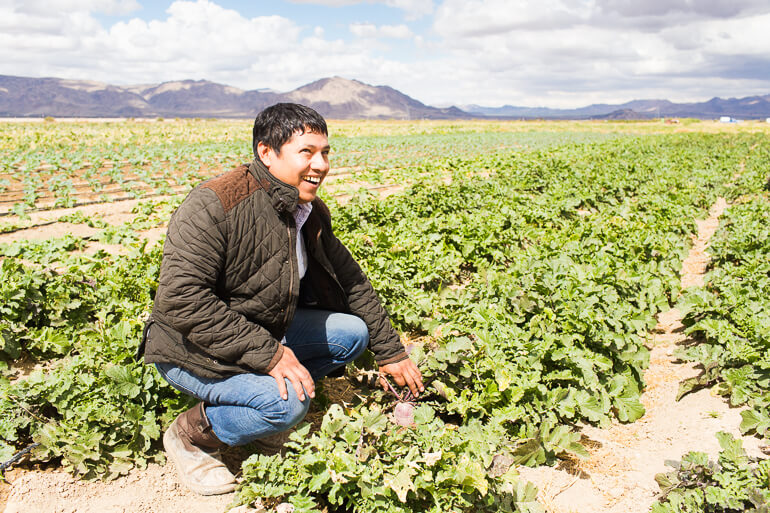 A couple months back we went to visit one of our favorite farms and biggest suppliers, JF Organic Farms. Not only do we pick up quite a large amount from their 40 foot stall each week at the Wednesday Santa Monica Farmer’s Market, but they also deliver directly from their farm to us twice weekly. Farm fresh to us! See Part One of our visit to their first property in Yucca Valley  where an eclectic collection of livestock reside. Next, we followed Farmer Luis about thirty minutes to their flatland property in Lucerne Valley. 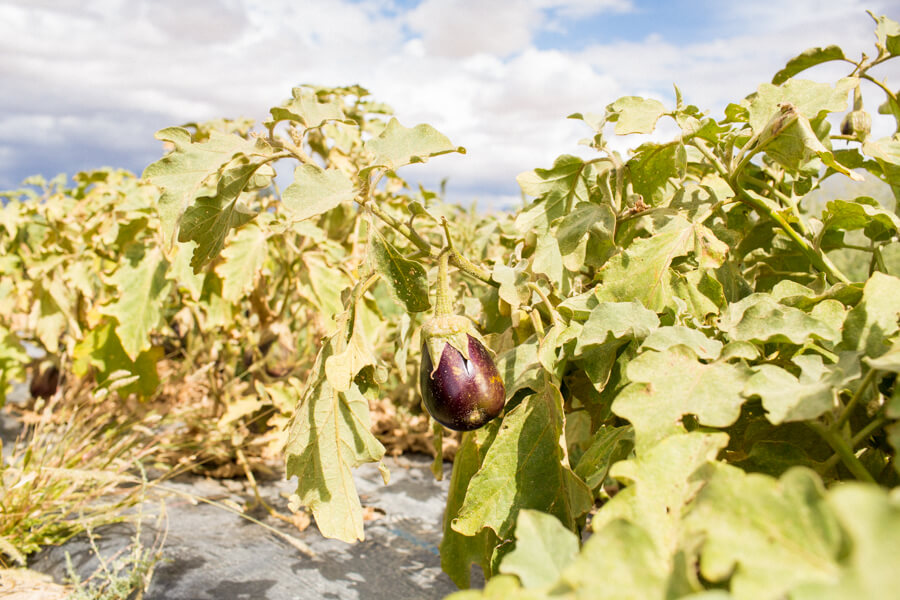 JF Organic Farms uses heirloom seeds to grow eye-popping varieties of common produce like these baby eggplants. The weather has just recently turned too cold for eggplants so we won’t see them again until next summer, but we sure enjoyed them while they were here. 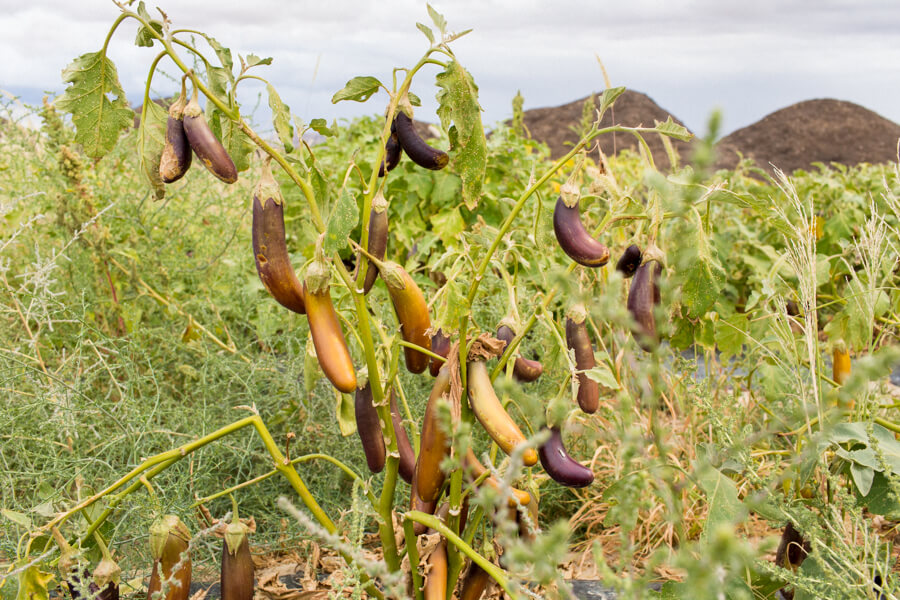 Crops that are not pretty enough to sell at market, such as these discolored and dry eggplants, are harvested for their seeds to replant and the rest are given to the livestock back on their Yucca Valley property to supplement their diet. This farm doesn’t waste any resources.

In the background is a big pile of compost made of manure from the Yucca Valley property as well as pulverized garden trimmings. This combination is layered into the ground soil in Lucerne Valley to hold in moisture and provide a natural fertilizer for the soil. To further enhance the soil’s viability and health on this land, the crops are regularly rotated and allowed to rest during certain seasons. JF Organics is able to do this age old technique of organic farming because they have enough land to still function and grow crops to support their operation.  Not all small farms have this latitude, and so this is why JF Organics has such a bountiful variety that they bring to market each week. The more expensive land becomes, the harder it is for small farmers to purchase their own property and farm the land using sustainable practices. 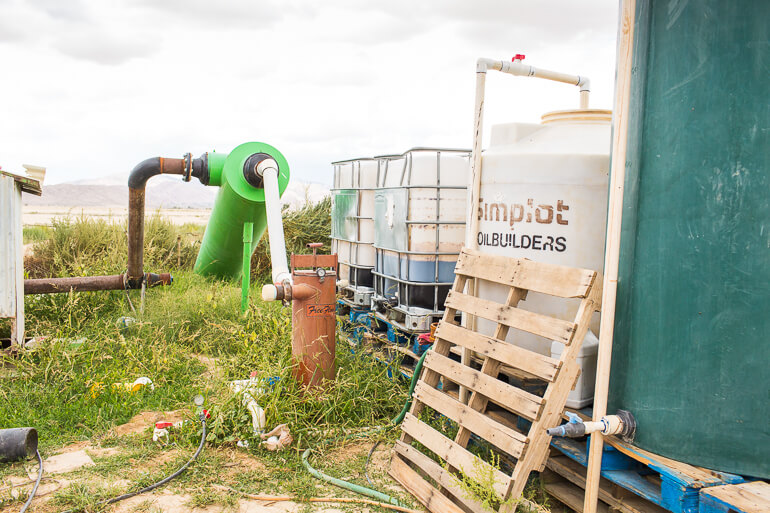 Compost is also used to make a “tea” through this filter system. It gets irrigated onto the crops once a week to give them natural boosts of food, instead of artificial fertilizers which are uniformly used in conventional farming. 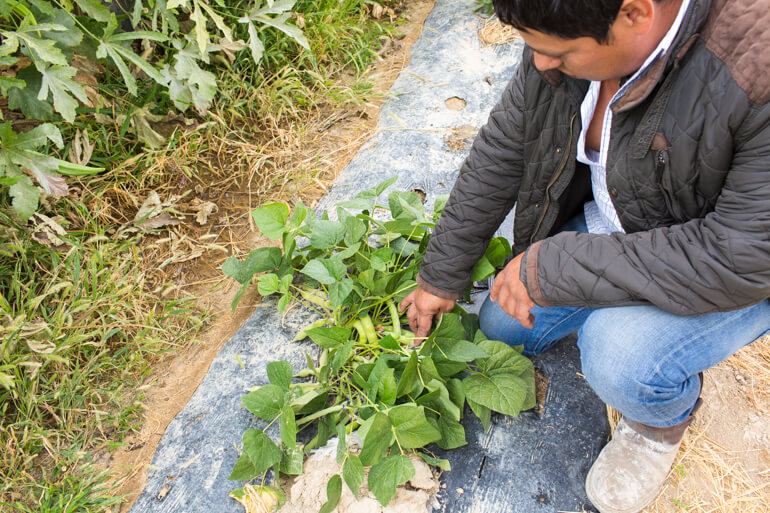 Here Farmer Luis shows us a jicama plant he is experimenting with and growing for it’s seeds. He’s constantly searching for new flavorful varietals esteemed by Los Angeles chefs. 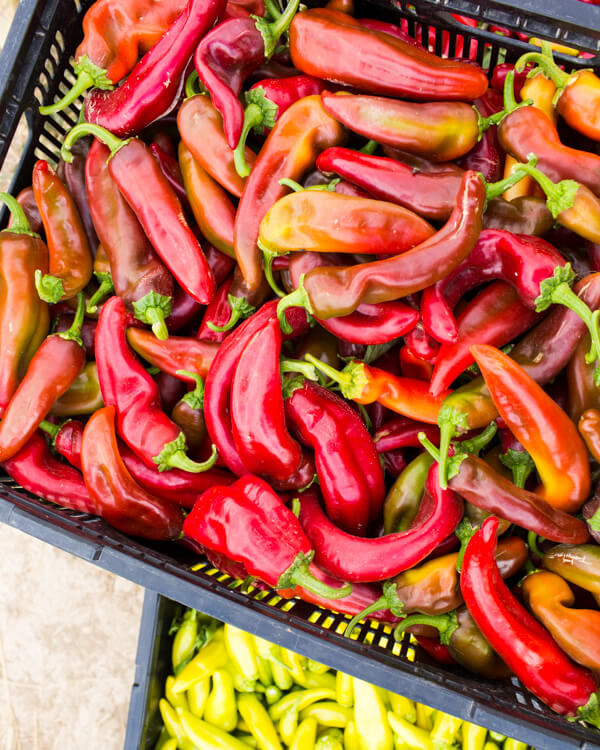 These red lipstick peppers were seen all over our fall seasonal menus. They were a bright burst of crisp sweetness whose irregular shapes added to their charm. 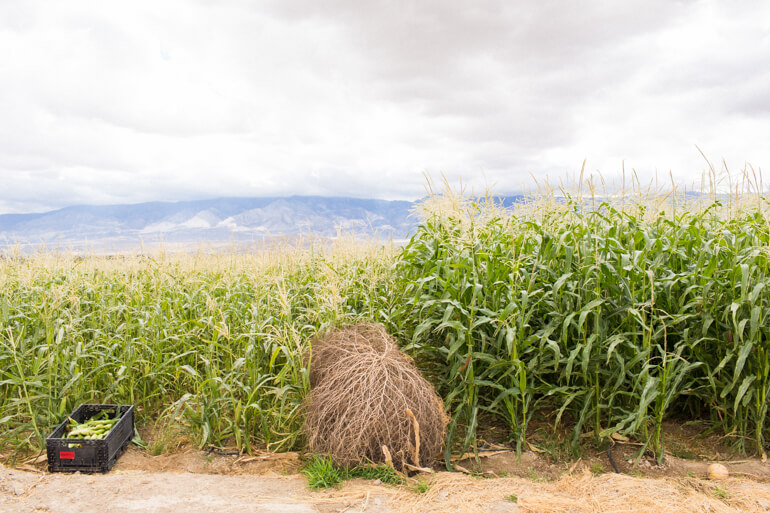 Very little of this organic corn is sold at the market, rather most of it is grown for their livestock in Yucca Valley who eat the stalks as well as the kernels. It’s much more economical for JF Organics to grow their own feed rather than buy it, so they grow a purple, hard corn that yields 4-5 times as much as the traditional yellow corn. 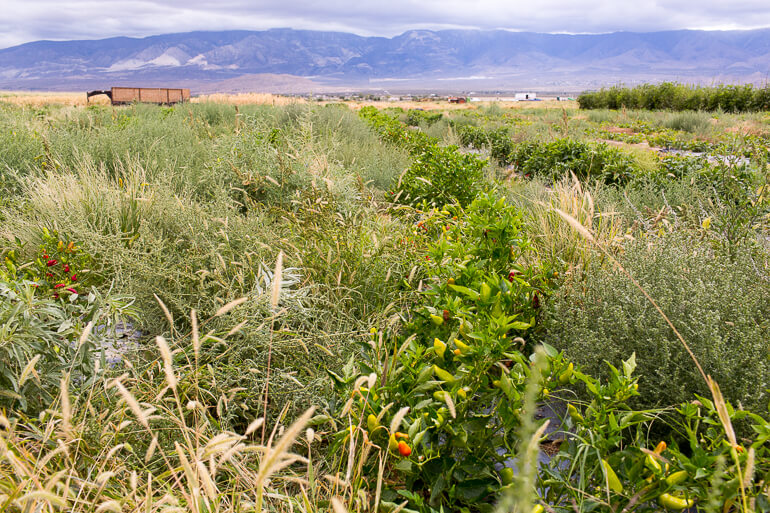 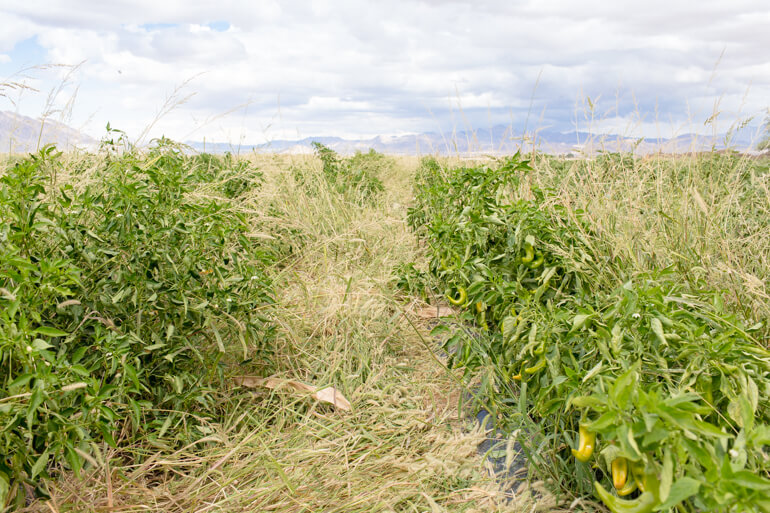 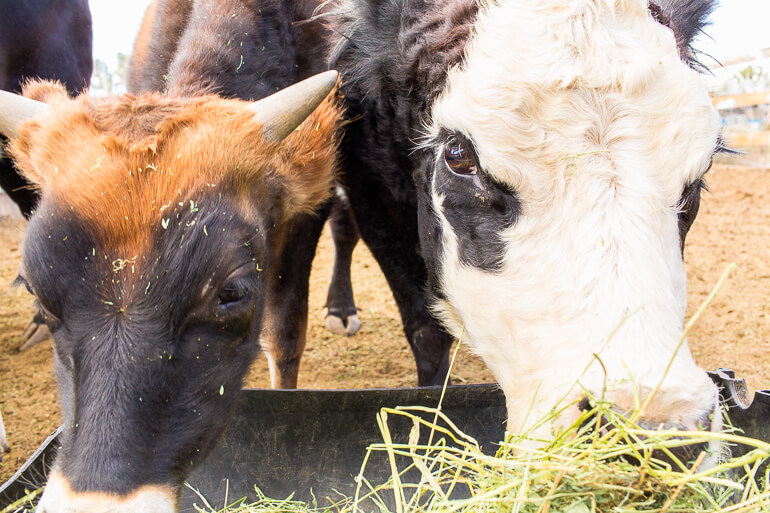 Farmer Luis said they used to pull out weeds that grew around their crops but then the crops, exposed to the sun, would burn. So they learned to keep the weeds in to protect against the elements and then would harvest these weeds and dry them to use as additional feed for their livestock. You see how the cycle works so efficiently when a farm incorporates biodiversity? 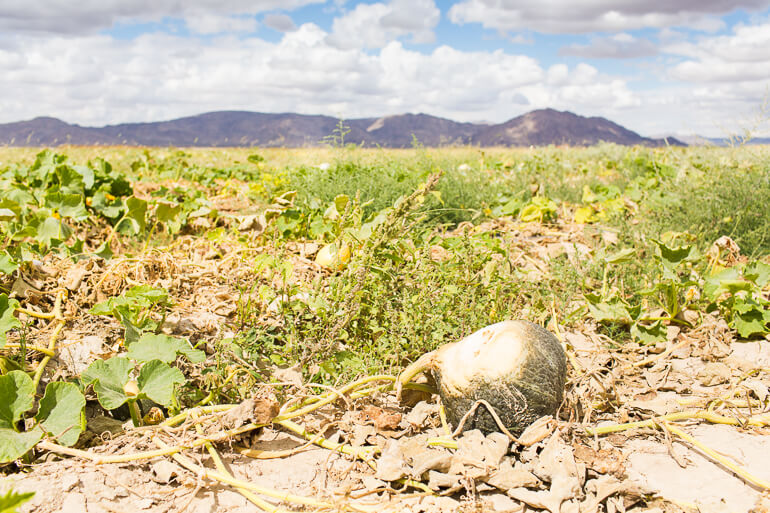 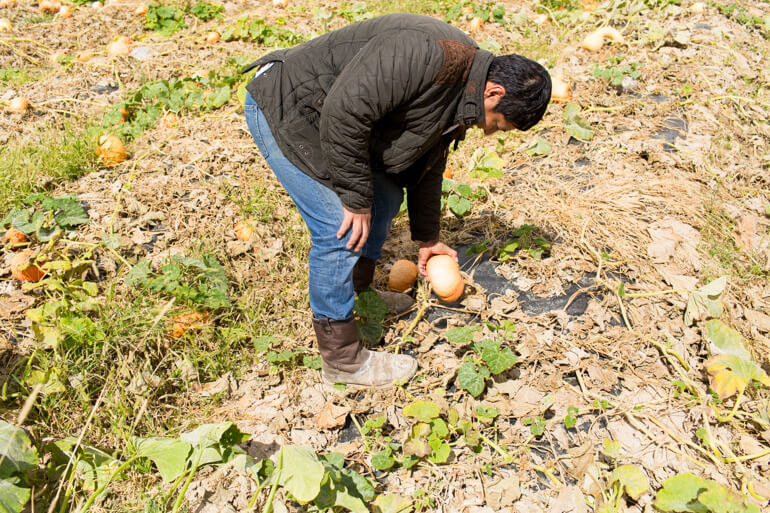 These squashes were not so lucky to have high weeds protect them so they got severely sunburned. Farmer Luis says that customers reject produce with unsightly coloring and they go unsold, so we bought them. They taste exactly the same! Something to consider when you are purchasing organic produce. Weird is good. Thanks for having us Farmer Luis! See you at the market.