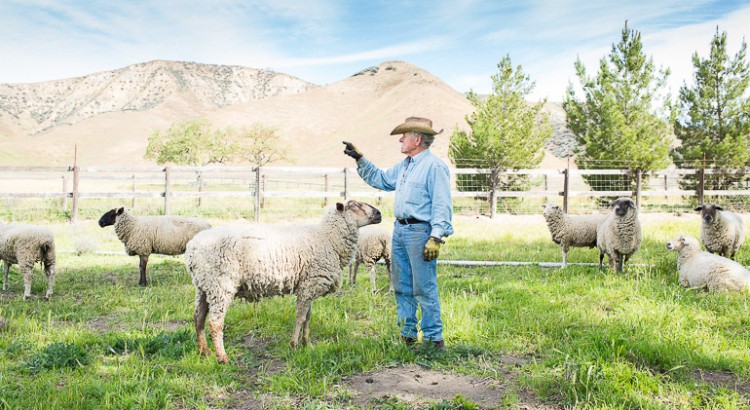 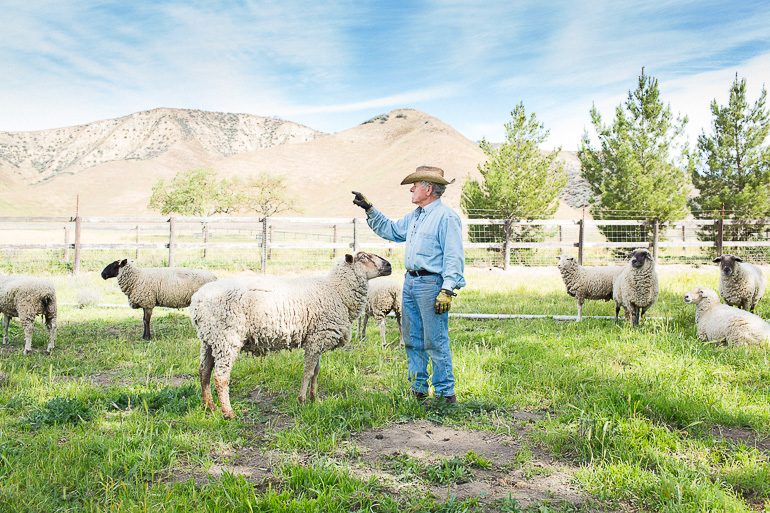 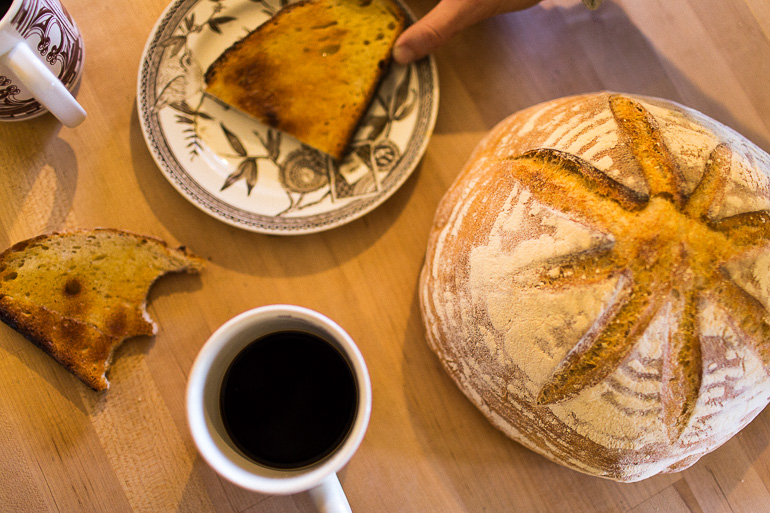 The sheep all love Farmer Bill Spencer, and so do we. Upon our arrival for a morning visit to the biodynamic Windrose Farm in San Luis Obispo, he greeted us with fresh baked bread that he had made the day before. Oh, my weak spot. I could’ve eaten that whole dense, gluten-rich loaf! As he proudly explained that he used Nancy Silverton’s recipe and an old blue Le Creuset Cast Iron French Oven for his bread, I wondered if this same passionate enthusiasm is how he approached farming 25 years ago when he had left his real estate career to buy a plot of land with his wife Barbara and begin their lives as farmers. 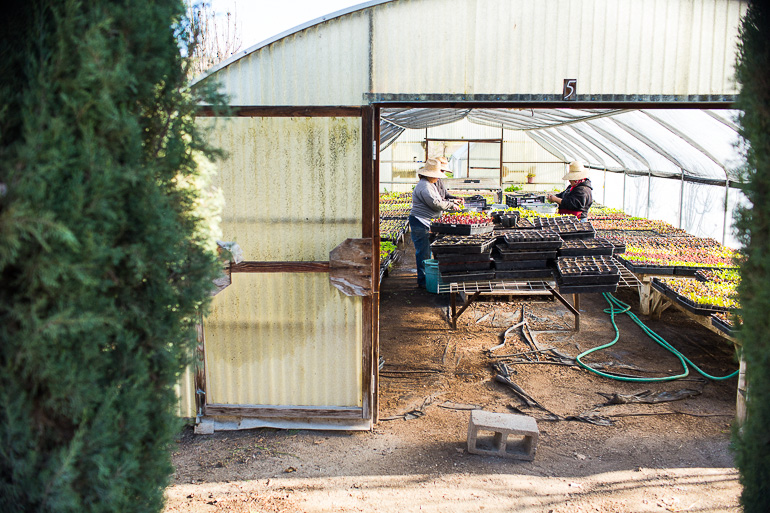 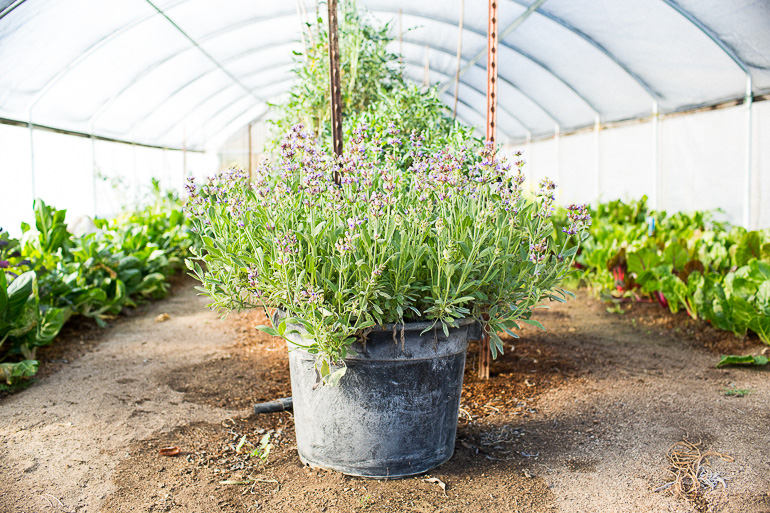 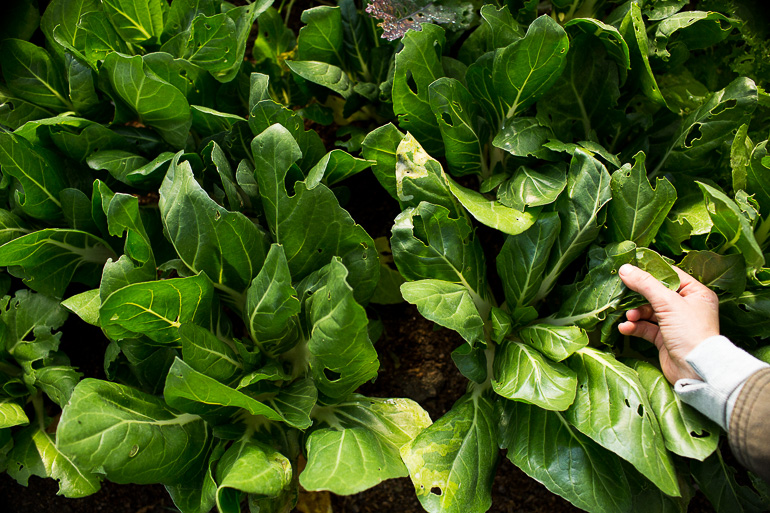 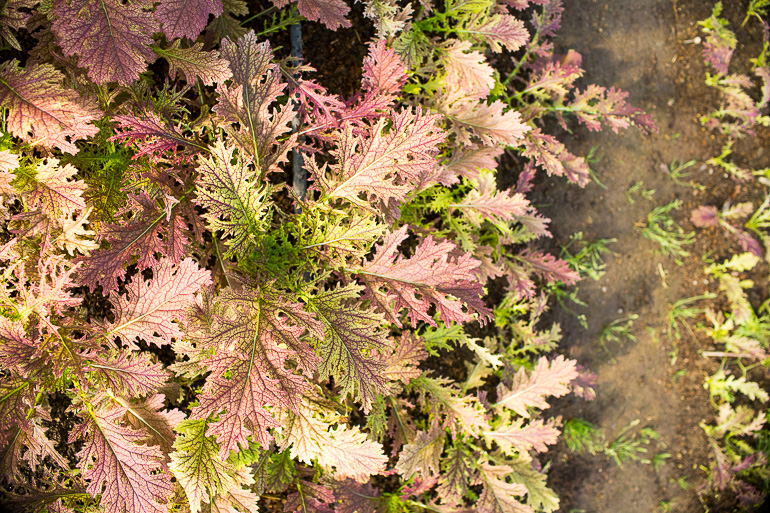 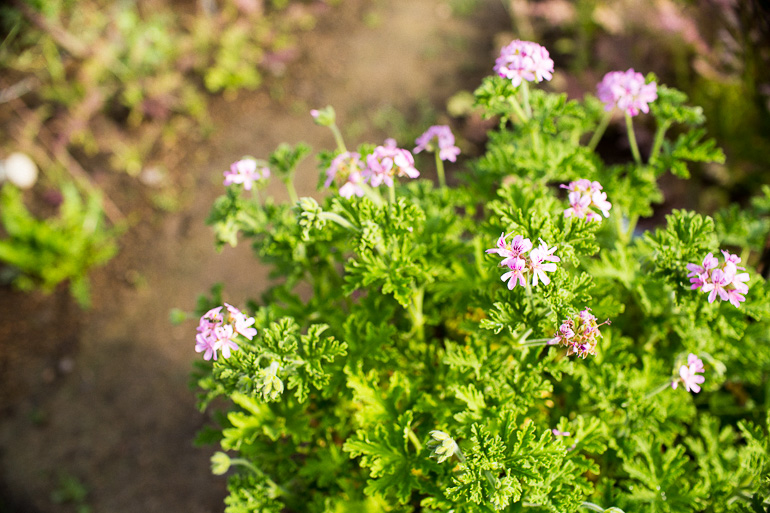 Just outside Bill and Barbara’s house is a collection of greenhouses where they grow their prized greens and flowering herbs. The crops were all so willowy and feminine that I felt underdressed meeting them. Brushing past a number of them released delicately sensual aromas that I wanted to bottle up and take home. Have you ever smelled rose geranium? It’s like a mist of a rose perfume thru a silk nylon filter, and the first time I ever encountered it was at the Wednesday Santa Monica Farmer’s Market on the Windrose table. It’s very durable so it holds up to long, high heat for jamming, and so you see it a lot in strawberry jams where it is the most perfect combination. 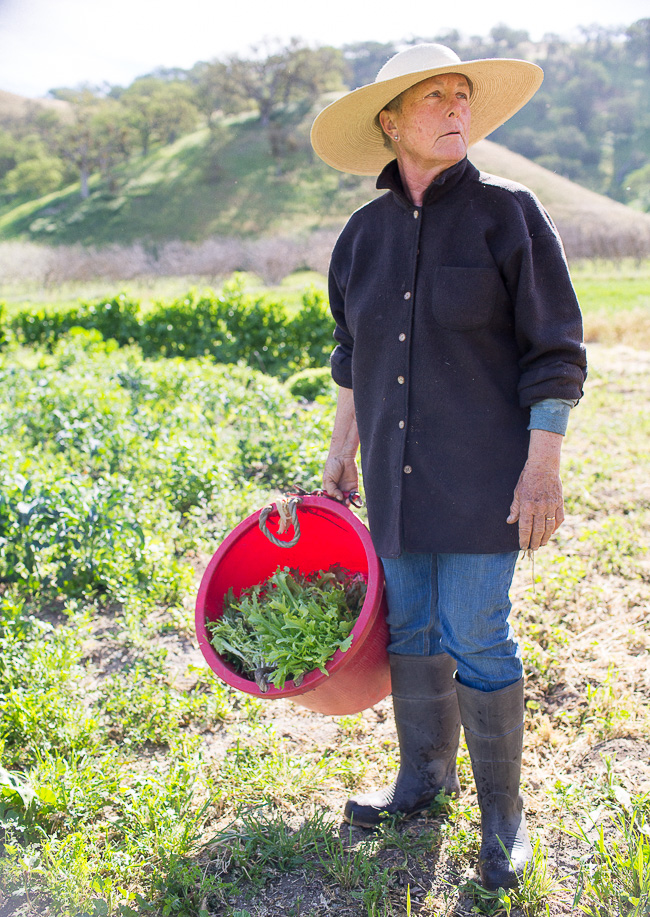 It is Barbara who works the table on Wednesdays in Santa Monica, so you may recognize her. Here she is picking a special order for a nearby restaurant. I wish we were nearby and could just order fresh buckets of greens from her each day but I’m infinitely appreciative that we get to sweep up her pretty produce on Wednesdays. 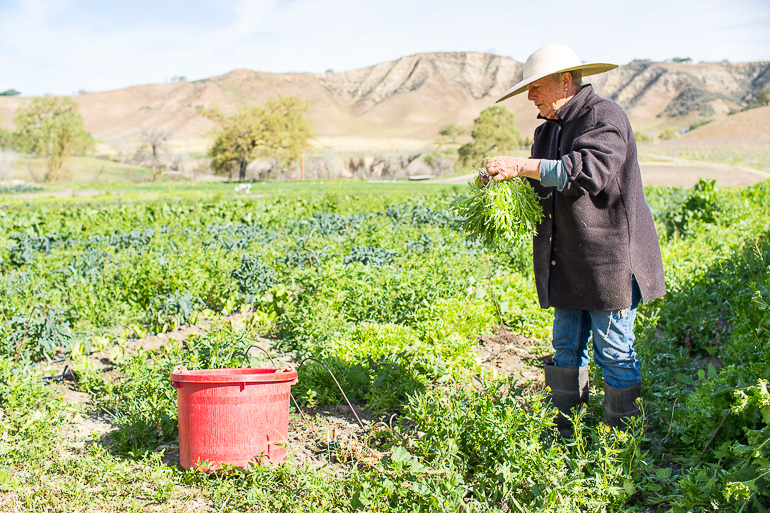 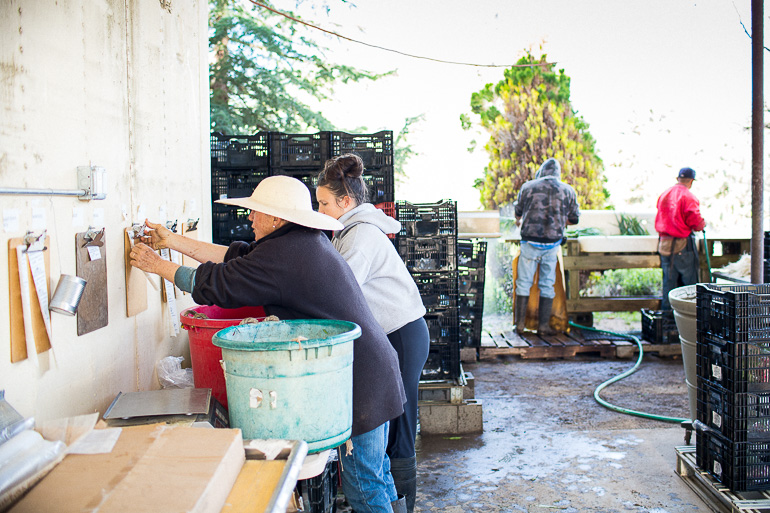 This is the rinsing area where fresh picked produce is washed and organized for orders. It all smelled very clean, almost spa like. I think I’m guilty of romancing this farm, but you know when Barbara and Bill bought the land, it was a monoculture of baby’s breath flowers. The soil was dead and so they planted cover crops like alfalfa and clover to feed it as well as compost including horse manure (!) so that within a few years they were able to plant heritage seeds “without much thought behind it.” Everything just grew wonderfully from there on out. 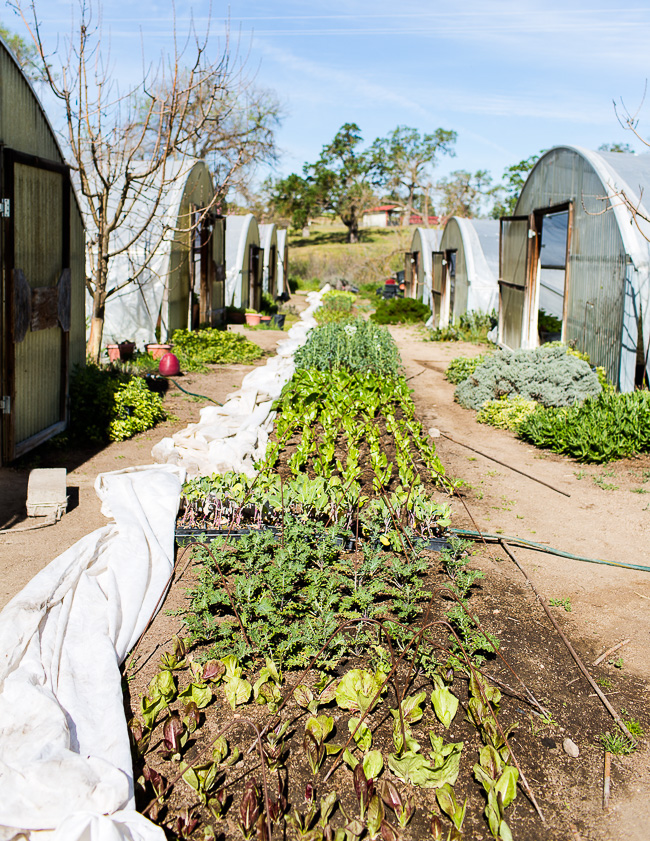 The most popular green mix that Windrose sells is this whimsical collection of seeds that was just randomly thrown on some compost and has continued to thrive. It’s called “Barbara’s Green Mix #3” and is comprised of kale, chard, red dandelion, and minutina. 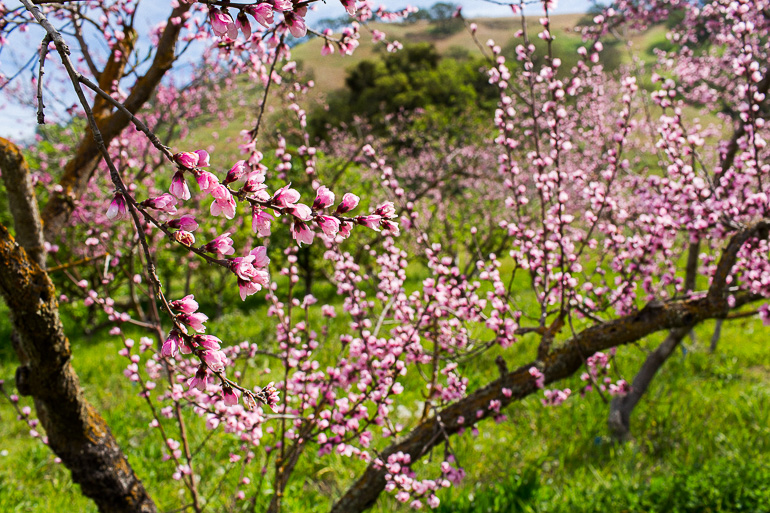 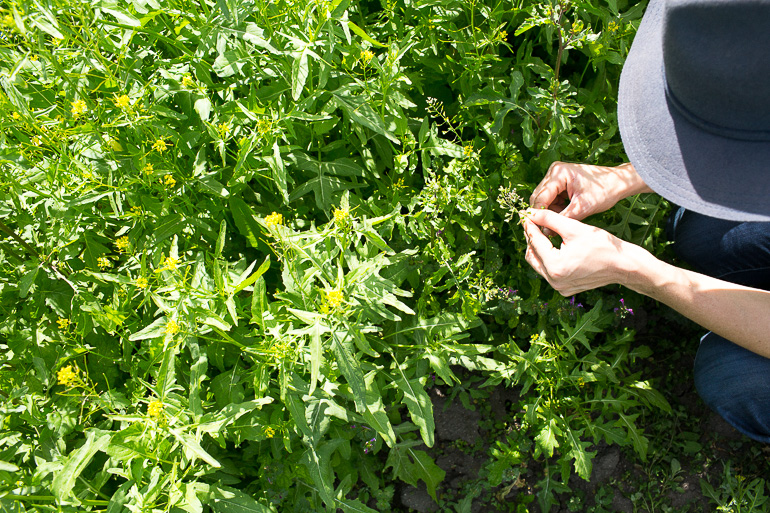 Wandering around this tranquil farm, we encountered the most stunning apple blossom trees and this unusual spicy tatsoi. This sublime heirloom produce is why all chefs are crazy for this farm, and Barbara sells out early each week in Santa Monica. 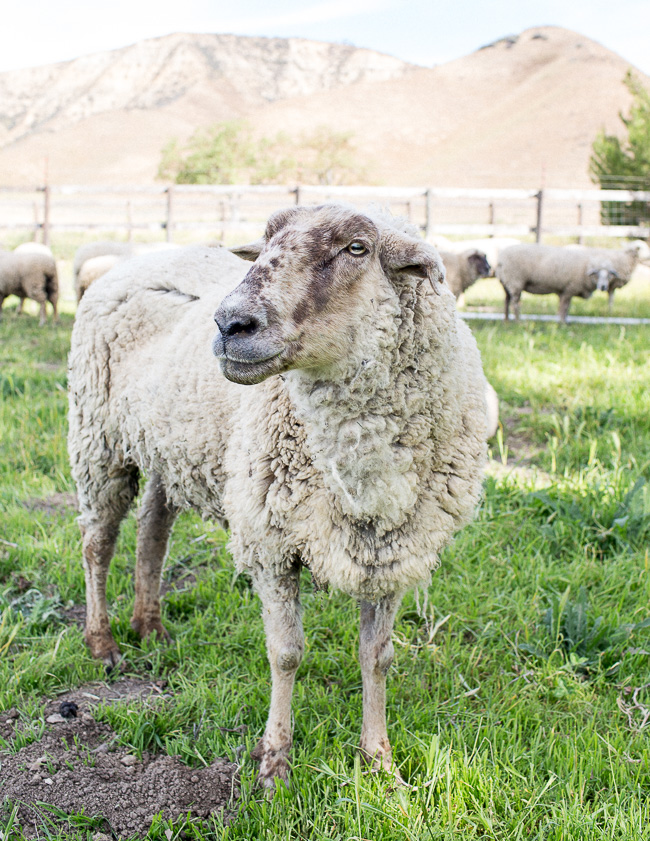 This sheep posed for me, regally as you can see, for at least thirty minutes. He even encouraged me to pet him but it’s Bill who he loved most as you can see in the first photo of this post. 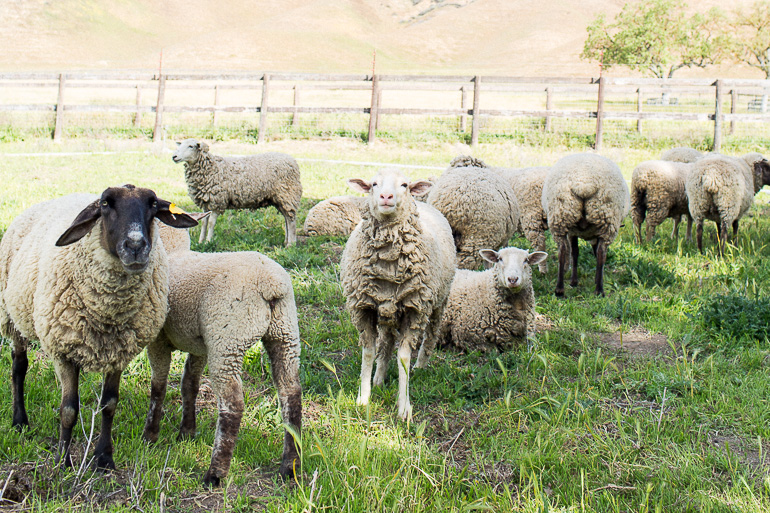 When this City Slicker asked Bill if he raised sheep for their wool, it was nice of him not to laugh. He’s a lovely man. Instead he explained to me like i’m sure he has had to a million times before that these sheep are outside and filthy! It would be so labor intensive to clean and sanitize their fur, but what he utilizes them for is to chew up his cover crops when he is rotating his fields for a diverse farming culture. Using a machine would systematically mow up beneficial insects like lady bugs who eat aphids so he switched to nature’s answer. Also their manure provides beneficial compost to the soil. 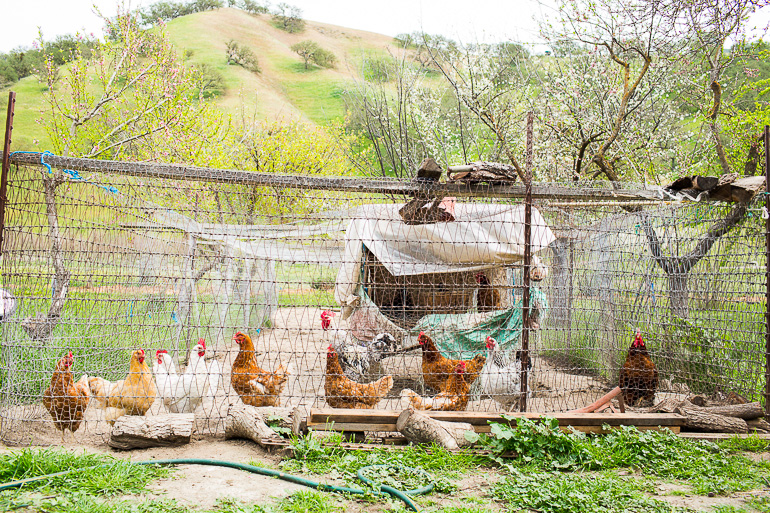 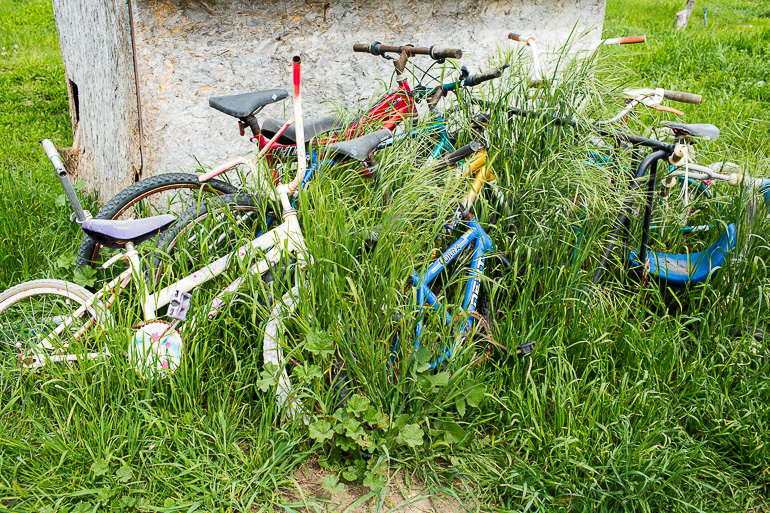 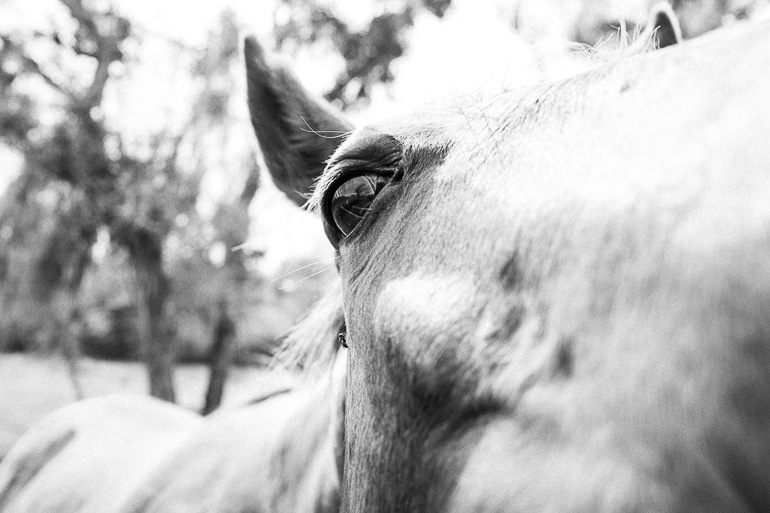 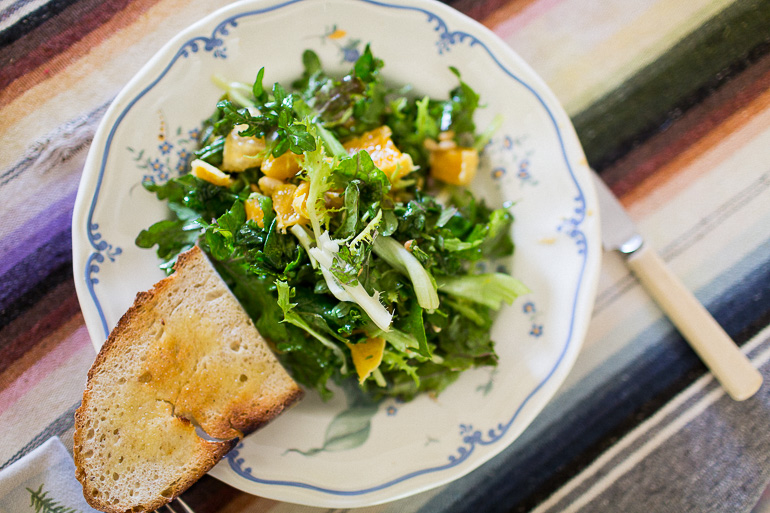 There were so many surprise pleasures in our exploration of Windrose Farm. A random chicken coop, a bicycle “cemetery”, a soulful horse who followed me around for awhile, and lunch with more of that delightful bread. 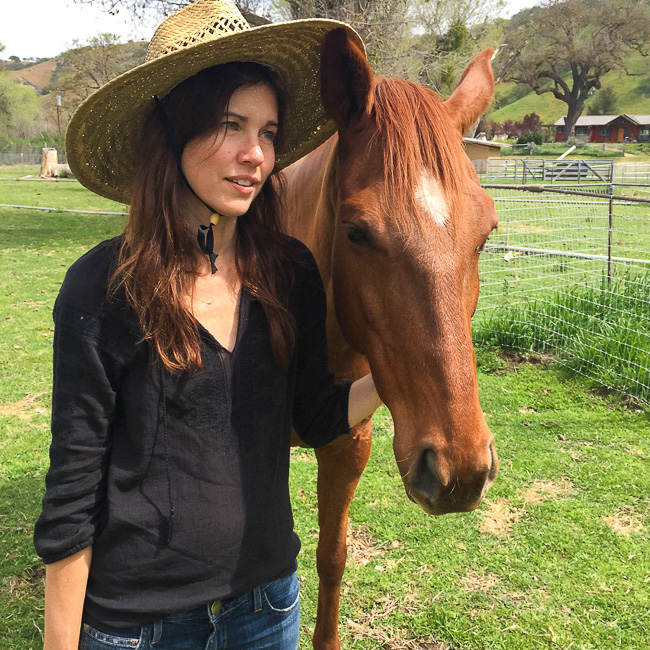 The house in the background is where Bill and Barbara live and, Uma, this horse who looked me in the eyes as if we’d known each other for years, belongs to one of their farm managers. This city slicker was completely captivated by this entire farm experience. Leaving it made me feel more committed than ever to aggressively  align Heirloom LA with the work of family farms over big agriculture with their ominous monocultures that dominate our country’s farming. We all have the power to make change with our food dollars. It’s our responsibility to seek out where our food comes from and demand that there is transparency. Windrose Farms has open houses regularly for anyone to come see what they do, and I encourage you to do so. Then do something about it. Sign petitions against the DARK Act, demand food labeling, and protest Ag-gags. Show your children how to appreciate nature and gardening. The state of our broken food system is all in our own hands. Don’t be neutral on a moving train.